After a bit of fun with Excel sorting, above are the places in town with the narrowest bike lanes. I put Elizabeth St. N.E. at Central Ave. at “0 inches,” as not only does the bike lane disappear approaching Central (that’s common, as everyone knows), but there’s signage up pertaining to installation of a new traffic signal there: 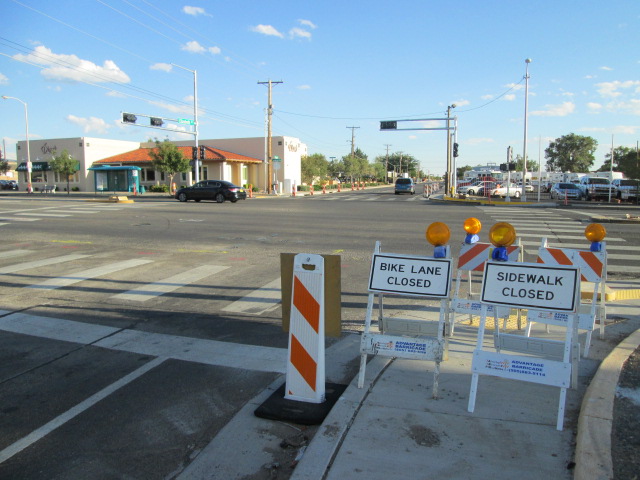 The funny thing is, the Elizabeth St. “bike lane” picks back up south of Central in all its glorious 20 inches of width. As such, it’s the narrowest “bike lane” we’ve found so far. If you don’t know Elizabeth, it’s the renamed Morris St. N.E. just north of Central down to Southern. Here’s a look:

Not the most bike-friendly stretch in town, but there are bike lanes (and “bike lanes”) in the area, including one on Chico, a street increasingly infamous as the site of pedestrians being struck and killed. It’s a tough stretch of road.

We’re at 192 different data points now in our AABLE effort, with new recruits sending in data (thanks, folks!, keep ’em comin’!). While all the measuring is fun, what’s most interesting are the Elizabeth’s of Burque. The street is such a weird place to put a bike lane. The speed limit is 25 mph, the traffic is extremely light (at least on a Sunday afternoon, especially compared with Central Ave.), and with bike lane striping looking like below, you’re thinking the job was done sometime during the Reagan Administration:

The antiquated, and inadequate, anomalies are fortunately anomalies. Still, they are “counted as bike lanes,” something that will hopefully change after AABLE is complete. By the way, thanks to whoever thought of putting a traffic signal at Elizabeth and Central. Crossing Central there on a bike is murder with only a stop sign, even on a Sunday afternoon. Of course, the far more important reason is to save pedestrians who are killed in the area at an epidemic rate.

Many more bike lane rivers to cross. If you’re interested in joining in, and/or just want to see what’s been measured so far, throw me an email and climb aboard. I’ll race you to finding the overall consistently narrowest lane in town.