(Editor’s Note: The following is based on a very true, very autobiographical story. The tale eventually winds its way back to having something to do with New Mexico, but we’re gonna spend quite a few hundred words in the Midwest first.)

Let’s say you’re taking a long-distance bicycle tour of the Midwestern United States, having never been here before, heading south from Madison, Wisconsin into Illinois via the Badger State Trail.

Wisconsin’s excellent rails-to-trails network has pretty much gotten you all the way from La Crosse, at the Minnesota border, hundreds of miles to far North Central Illinois without having much, if anything, to do with cars and trucks. You’ve taken this route for that reason, as well as the fact the Badger State Trail runs directly into the Jane Addams Trail at the Illinois border.

All is smooth rails-to-trails bike sailing to this point, BUT while the Jane Addams is one of the best you’ve ever been on, your eventual plan is to get back to the Mississippi River down to the Quad Cities, before veering back a bit to meet your mom in Galesburg, Illinois. And to take the Southwest Chief Amtrak from Galesburg back home to Albuquerque.

If you’re not a Midwesterner, you’re probably asking “Huh?” and “Where the Hell is that?” a lot so far. That’s okay, because Scot our hypothetical protagonist “you” might have been asking exactly the same questions.

That’s where this map from the Illinois Department of Transportation website comes in: 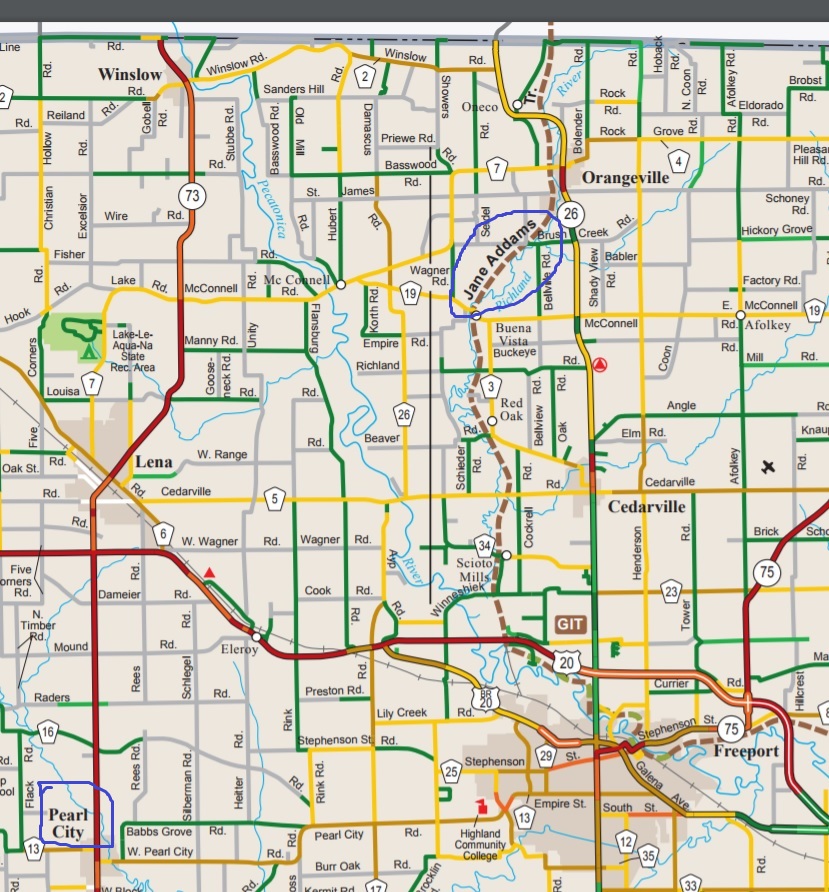 The black bar at the top is Wisconsin; the two crudely drawn blue circles indicate the Jane Addams Trail heading pretty much north/south from the border until turning east, the “wrong” direction for our hypothetical “you,” and Pearl City, the place where “you” want to go as you head back west toward the Mississippi River.

So, being an out-of-towner, who has never been close to Stephenson County, Illinois, how can we safely bicycle from the cushy Jane Addams Trail to Pearl City? Well, what if we combined the map above with the legend below?

Yes, we’re gonna look for green and avoid red & black, for the Illinois Department of Transportation has crafted a bicycle map for each county in the state denoting the ride safety quality, the “Level of Service,” of every road.

Let’s take another gander at the map, now empowered with the knowledge from its legend, and eyeball a route (crudely drawn in hard-to-decipher blue) that gets us from a decent place to detach from the Jane Addams, right around Scioto Mills, over to Pearl City:

Yeah, we could instead take a longer route with more green in it, but we’ve designed this one because we’re okay with a little danger (we are, after all, taking a bicycle tour of the Midwest…Hell we’ve ridden through *Spencer, Iowa), so bit of yellow “caution advised” is alright.

So instead of tackling the fairly big city of Freeport, we’re frolicking in the bucolic countryside northern Illinois, ambling down roads with names like “Babbs Grove Road.” We happily arrive in Pearl City, ready for another stretch west, again designed via a “Level of Service” map from the Illinois Department of Transportation.

Which gets us back from our completely hypothetical reverie about Midwestern bicycle touring, and thinking instead about long-distance bicycle touring here in New Mexico.

As mentioned a few days back here at Better Burque, the NM Department of Transportation is developing New Mexico’s first ever statewide Bike Plan. NMDOT is currently collecting stakeholder input, and by “stakeholder” they/I mean “you.”

Here’s an email address to contact Plan officials with your thoughts about what should go into this very first Bike Plan. Perhaps you could pass along your interest in creating “Levels of Service” bicycle maps, both at the city/county level and state-wide, as has been done in Illinois. Now that I think about it, perhaps you could also pass along your interest in creating as many rails-to-trails as possible, as has been done in Wisconsin.

Regardless of your thoughts, even if you think prioritizing “Levels of Service” and rails-to-trails over other important bicycling needs is wrongheaded, please pass along those thoughts to (for those who don’t like clicking on links):

Sure, I/we at Better Burque hope literally thousands of BB readers inundate the Plan folks with “Levels of Service is better than beer ice cream!” emails, but the most important thing here is to take a few minutes to pass along your thoughts, whatever they may be.

And to ride the Badger State and Jane Addams Trail when you get a chance. They are stupendous. We can even meet up in Pearl City later. I know a route.

*Riding through Spencer, Iowa is a tale of bike touring woe best told in another blog post.