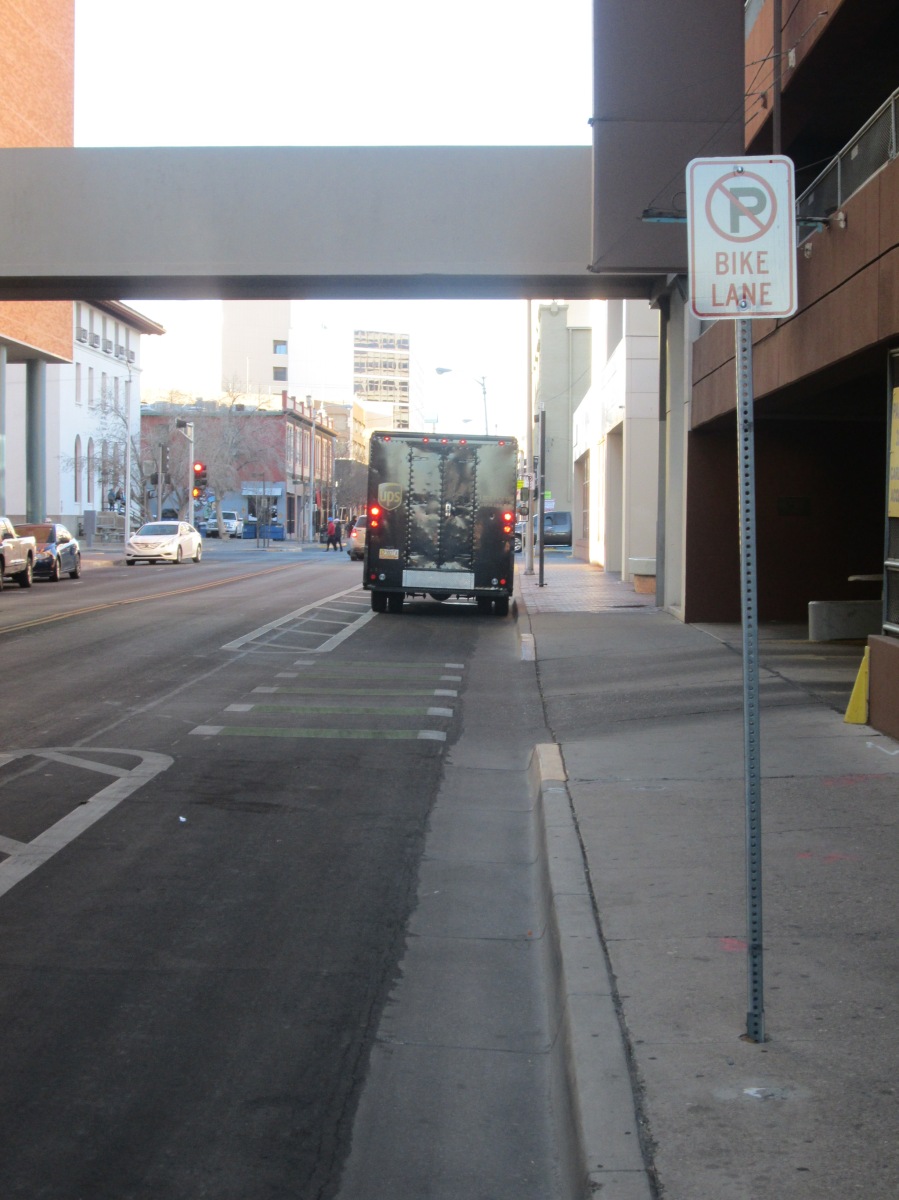 Yeah, that’s a UPS truck, in this case with flashing lights, parked on a clearly marked bike lane INCLUDING a sign specifically forbidding parking in said bike lane.

Luckily for this UPS ne’er-do-well and scalawag, my photography skills are too poor to unmistakably make out the license plate number, preventing research and eventual confrontation with the specific UPS truck and driver. Nevertheless, we Bike Lane Protectors! (BPL!) could still take ACTION by:

Yeah, we could do all that.

And it’s really dumb of this UPS driver to park in the bike lane (in fact, one wonders if the UPS anti-left turn modus operandi somehow plays a role), but, aside from a citation for parking in a clearly marked bike lane (yeah, I know about enforcement), what’s going on here and, more importantly, how dangerous, in reality, is it to have a UPS truck parked in this particular stretch of downtown bike lane.

Hard Reality: The existence of downtown bike lanes on 4th and 5th is complicated, and, in some places, a dumb idea.

Case in dumb point would be this precise spot on 4th Street:

For over ten years, 4th Street downtown was my bicycle route to work, turning right from the stretch pictured above on to Gold Avenue on my way through downtown and up the hill to Lomas and Girard.

There were no bike lanes on 4th “back in the day,” and I can report NEVER, in literally hundreds of rides, having anything close to an issue with motorists while I rode northbound 4th where that UPS driver is parked. Traffic is light, the new stop signs along Silver, including 4th, have slowed cars down even more, and there’s just really no reason to have this bike lane. Period. Put up some “Bikes May Use Full Lane” signs along with stretch of 4th, and we’re good.

Of course the reason 4th and 5th have bike lanes downtown is due to what we’ll call “Mayor Berry’s 50-Mile Activity Loop.” 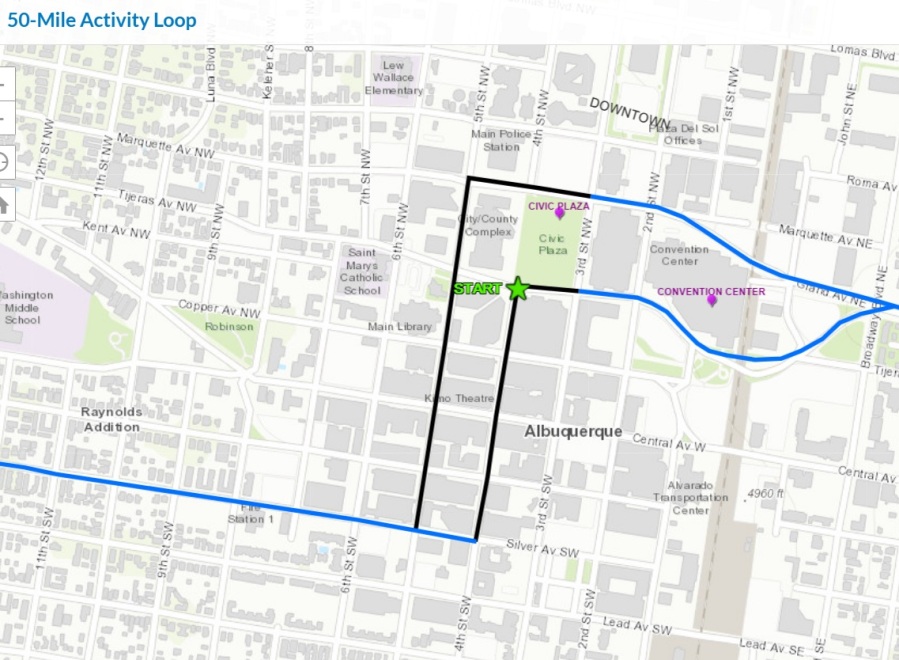 We’ve ridden and discussed the Activity Loop (Don’t call it a “Bike Loop.” No, DO NOT DO THAT) before here at Better Burque. The bike lanes on 4th/5th provide rather inexplicable one-way connection on two-way 4th/5th from MLK/Marquette to Silver.

Evidently designed with zero bicyclist’s input, these bike lanes are, to be honest, showy, one might say ostentatious, demonstrations of “bike friendliness” from people who wouldn’t ride a bicycle downtown if a gun were put to their head.

So on one level, these bike lanes are, for lack of a better word, stupid.

They also generate significant and understandable heat from businesses and motorists who want to sell and buy stuff, respectively, along these corridors. Fewer places to park and ostentatious bike lanes lead invariably to what is largely unnecessary conflict between two groups always ready to wrangle: cyclists and everyone else in the world.

The other complication here is that a certain wrinkle to the 4th/5th bike lanes make defense of them by cyclists very, VERY important. Namely: 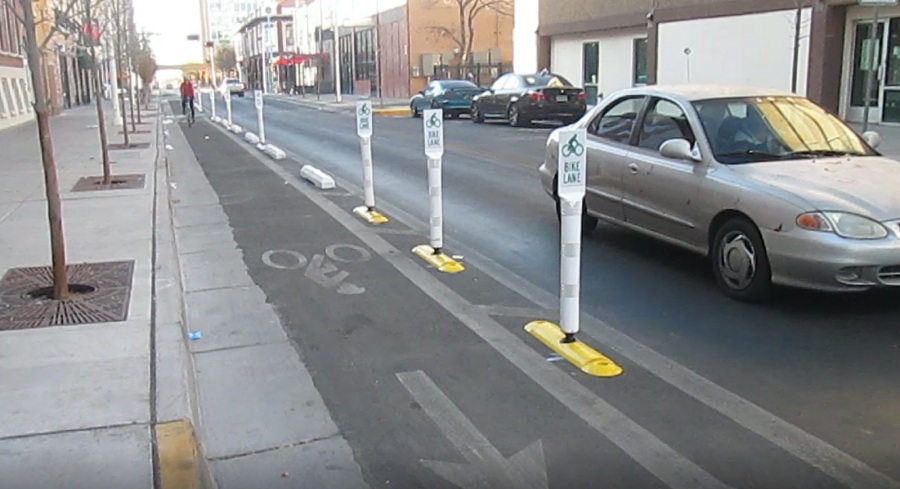 Yeah, that is a physically PROTECTED bike lane on 4th St. between Central and Copper. In importance, both in terms of existence and cyclists refusing to ever, EVER give it up, is that this little stretch constitutes the very first physically protected (not just a striped “buffer”) bike lane in town.

This, simply put, is important. Doing away with it would not only be stupid, but indefensible, even though, admittedly, riding this stretch of 4th has never really been a dangerous proposition for cyclists.

Until we as a community truly start to tackle the hard reality of these downtown bike lanes, we’ll keep up the essentially pointless cycle of some parking in bike lanes, with pretty much zero enforcement, followed by others taking photographs of said parked vehicles in the bike lane.

Because that’s easy. Truly addressing the situation is hard, for all parties involved. To mess with H.L. Mencken’s famous dictim: “No one ever went broke by underestimating the willingness for humans to take the hard path in making public policy decisions.”